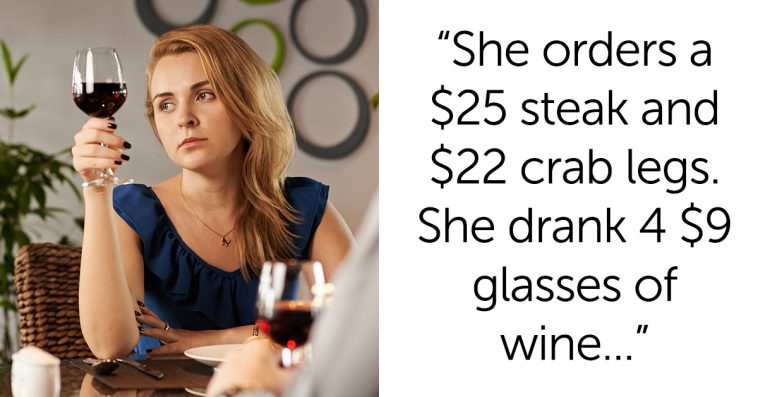 Dating is hard. Some people though make it even harder. 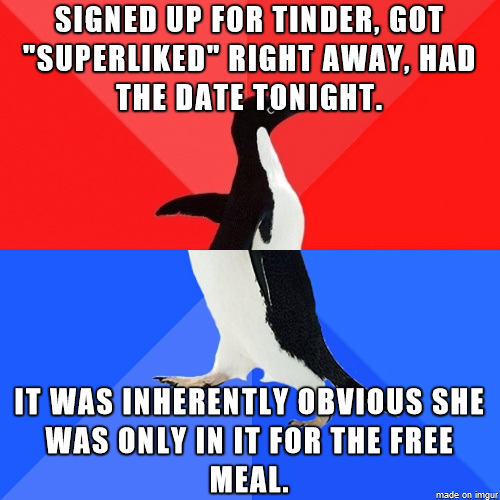 “I signed up for Tinder, just to see what would happen. A few hours later, I got “superliked,” which is apparently better than “liked”. We talked for a few days, she seemed super cool. I suggested a date, and she insisted on it being dinner.

Cool. We met up tonight at a restaurant I’d picked out. She didn’t look at me, wore sweatpants, and immediately ordered an $13 appetizer. Okay, not a deal-breaker. I tried starting a conversation a few times, but she only gave one word answers.

Then, she orders a $25 steak and $22 crab legs. She drank 4 $9 glasses of wine. I got the steak, and a few drinks myself. Right about the time our main course(s) arrived, I’d pretty much given up.

She talked more to the waiter. As we were finishing, I excused myself and went to the restroom. While I was in there, a light bulb went off. I left the bathroom, headed out the door, got in my car, and drove home. Now, here I am. She messaged me a few times, called me a “f*cker” about twelve times. Eh.”

Commenters were quick to praise him for his response to this nasty situation:

Others offered their own solutions for avoiding this type of predicament:

Whereas others still thought OP was being kind of a d*ck:

What do you think?